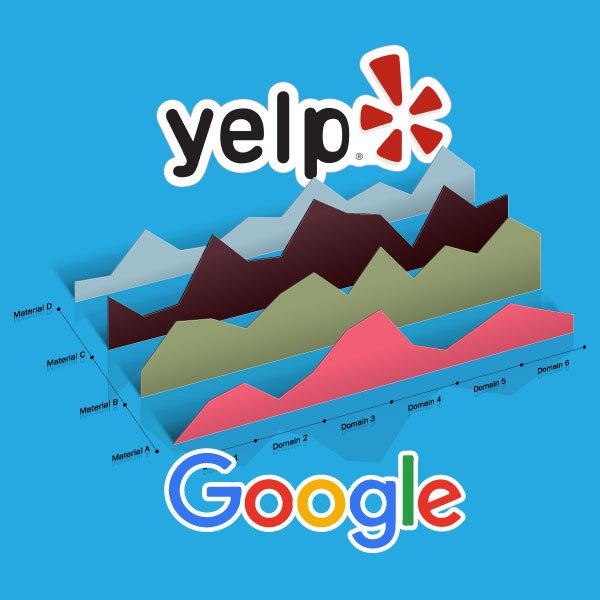 When it comes to reviews, The main rivalry is Google reviews vs. Yelp. With Google leading the race, yelp reviews are also very important for creating an impact strategically. Google is the number 1 search engine, has its benefits for Google reviews vs. Yelp. However, as Yelp is designed as a reviewing platform, the yelp algorithm is better for processing reviews.

Google Reviews vs. Yelp- A comparison

When you search for a business online on google, Google displays you a knowledge panel. This knowledge panel includes all the basic information regarding the local business, including their contact information, directions, and reviews. As Google is the number one browser and has a search market share of more than 85%, Google reviews have the number one spot in the Google reviews vs. Yelp. This exponential rise in the popularity of Google reviews is evident over the last four years before that Yelp has an edge as it was a dedicated reviewing service.

When it comes to searching for local businesses, bing uses yelp reviews in their search results. Thus as the number of users for bing are far less as that of Google. Thus yelp reviews are visible to a relatively lesser population around the globe. However, it is observed that bing is generally used by people of ages in the range of mid-40s. These users have significant decision-making power in the households, and thus the yelp reviews are substantial.

When it comes to the ratings and overall nature of the reviews, it is observed that the google reviews are more positive than the yelp reviews. Most yelp reviews are negative. The negative tone of yelp reviews is mainly due to the Yelp algorithm and how it intrigues the customers. As online users are more prone to Google, thus they write reviews irrespective of their experience. However, when users write reviews on Yelp, it mostly happens due to some bad experience experienced by the user. The ratio of general reviewers on Yelp is less than that of the Google reviews.

When coping with the reviews, business owners, and general customers, a major concern is whether the yelp reviews are reliable. Well, the answer to this question is difficult to express. You can say that yelp reviews are mostly reliable and seldomly not. Anyone can post on Yelp, but generally no monetary reward in reviewing. Generally, people post reviews according to their feelings. But as the yelp algorithm is not designed to identify every bogus/fake review, there are some fake reviews on Yelp that are either fake or bogus entirely.

The whole process of considering yelp reviews as reliable is dependent on considering the profiles of reviewers first. The profiles of the reviewers could give you a general idea about the authenticity of the review itself. When it comes to identifying an authentic review from a fake one, generally, people with multiple reviews and having mixed reviews with details included in the review tend to be more authentic than the others.

As the major share of the reviews over the recent years is shifted from Yelp to google reviews, it is evident that the central management currently required is also over the google reviews platform. The platform has a generally conducive environment in which you can easily respond to the review. Similarly, Yelp also offers great review management facilities where the business owner can easily respond to the reviews as required.

When responding to the reviews, the strategy of google reviews vs. Yelp is different. While on google reviews, you should respond instantaneously, whereas, on Yelp, you should wait for 48 to 72 hours as the review might get filtered out. It is expected of you to respond to the reviews on both of the platforms. However, unattended reviews on Yelp receive a greater response from the community. So it is required of you to respond to each of the Yelp reviews to avoid further problems.

It is evident that when it comes to Google vs. Yelp, google being the number one search engine, has more reach as compared to Yelp. However, as the integration of the Bing search engine is with Yelp and Yelp is a dedicated reviewing platform, users cannot ignore Yelp’s importance. While managing reviews on both platforms are similar, the key difference exists in responding time and behavior.

Reviewers tend to write more positive reviews on Google reviews, while the general nature of reviews on Yelp is negative. Businesses can avoid this bias between the different reviewing platforms by providing effective and timely responses.

why are google ratings higher than Yelp?

Google ratings are generally higher than Yelp due to the difference in the reviewer base and need for reviews. Google has an integrated set of services to ask you for the review according to your location-based data. By asking the user for reviews, the user is encouraged to write the review, and thus, the overall ratio of positive reviews to negative reviews is balanced. However, on Yelp, the reviewers generally have to write a review after going to the site specifically. Reviewing on Yelp generally happens when the user had a bad experience. Thus as the number of positive reviews for google is higher, the overall google ratings are higher.

The trustworthiness of a review is a very tricky subject as the whole process is unsupervised. It is dependent on a variety of factors, including reviewer profile, details in review, language, frequency of visits, and multimedia attached. However, as you can post multimedia and your reviews on google, they are a bit more trustworthy in the google reviews vs. yelp case.

No, all yelp reviews are not fake. However, when it comes to reviewing websites, they are prone to fake reviews. These reviews are generally either by the business to promote themselves or are by the competitor to defame the business. The fakeness of a review is somewhat evident from the reviewer’s language, critique, and profile.

Yes, yelp reviews are a reliable source of information regarding a business. When it comes to reviewing, a review over the review platforms is dependent on several factors. These factors include, but are not limited to, language, writing style, reviewer profile, frequency of reviews, and other similar reviews. These parameters can identify reliable reviews from unreliable ones.

Is Yelp good or bad for business?

Yelp is one of the pioneers of reviewing platforms. As it was specifically designed for the reviews, the reviewing community prefers to review businesses and platforms. Therefore, it is beneficial to keep an eye on Yelp for reviews and respond to them accordingly as and when required. The Yelp reviews are featured in the bing web search, making them an integral tool for promoting and publicizing your business.